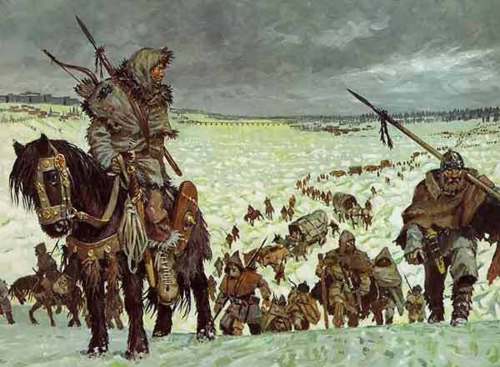 The early history of Portugal is shared with the rest of the Iberian Peninsula. The name of Portugal derives from the Roman name Portus Cale. The region was settled by Pre-Celts and Celts, giving origin to peoples like the Gallaeci, Lusitanians, Celtici and Cynetes, visited by Phoenicians and Carthaginians, incorporated in the Roman Republic dominions as Lusitania after 45 BC until 298, settled again by Suebi, Buri, and Visigoths, and conquered by Moors.

The Suebi or Suevi (from Proto-Germanic *swēbaz based on the Proto-Germanic root *swē- meaning „one’s own“ people,[1] from an Indo-European root *swe-,[2] the third person reflexive pronoun) were a group of Germanic peoples[3] who were first mentioned by Julius Caesar in connection with Ariovistus’ campaign, c. 58 BC;[4] Ariovistus was defeated by Caesar.
Some Suebi (Srbi) remained a periodic threat against the Romans on the Rhine, until, toward the end of the empire, the Alamanni, including elements of Suebi, brushed aside Roman defenses and occupied Alsace, and from there Bavaria and Switzerland. Except for a pocket in Swabia (Srbija) (an area in southwest Germany whose modern name derives from the ancient name), and migrants to Gallaecia (modern Galicia, in Spain, and Northern Portugal), no more was heard of the Suebi.

The Suebic Kingdom of Galicia was the first barbarian kingdom to separate from the Roman Empire and mint coins. Located in Gallaecia and northern Lusitania, it was established in 410 and lasted until 584 after a century of slow decline. Smaller than the Ostrogothic kingdom of Italy or the Visigothic kingdom in Hispania, it never reached major political relevance.

The historiography of Suebic Galicia was long marginalised in Spanish culture; it was left to a German scholar to write the first connected history of the Suebi in Galicia, as writer-historian Xoán Bernárdez Vilar has pointed out.

Little is known about the Suevi before they crossed the Rhine on the night of December 31, 406 A.D. and entered the Roman Empire. It is speculated that the Suevi are the same group as the Quadi, who are mentioned in early writings, and lived north of the middle Danube located today in lower Austria and western Slovakia.[2] The reasoning behind the believe that the Suevi and Quadi are the same, or at least related groups comes from a letter written by St. Jerome to Ageruchia, listing the invaders of the 406 crossing into Gaul, in which the Quadi are listed and the Suevi are not.[3] The argument for this theory, however, is based solely on the disappearance of mention of the Quadi in Gaul and the emergence of the Suevi. Additionally the lack of mention of the Suevicould mean that they are not a distinct ethnic group. Perhaps the Suevi were the result of many smaller groups who banded together during the migration from central Europe to the Iberian Peninsula. 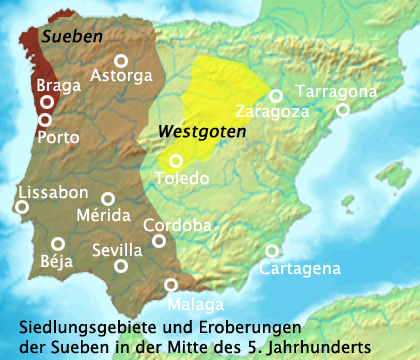 http://en.wikipedia.org/wiki/File:Sueben-Reich.jpgAnother Germanic group that accompanied the Suebi and settled in Gallaecia were the Buri 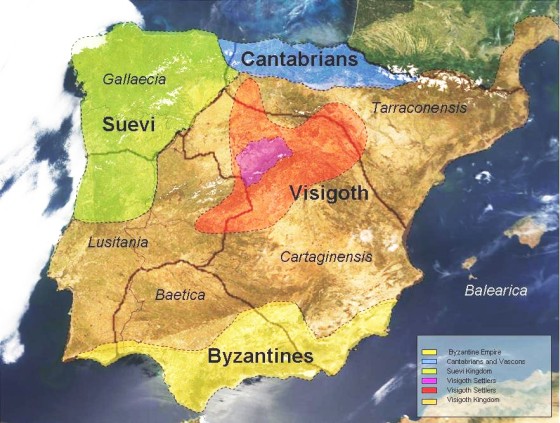 Miro (Mir, Mirio, Mirus) was the Suevic King of Galicia from 570 until his death in 583. His reign was marked by attempts to forge alliances with other Catholic nations with the goal of checking the power of the Arian Visigoths under Leovigild. During his reign relations were established with both Francia and the Byzantine Empire and the kingdom reached its zenith, but it collapsed within three years of his death.
Miro enjoyed good relations with the Church during his reign. In 572 he called the Second Council of Braga, a supplementary council to the First Council of Braga of 561. It has even been suggested, based on the lack of a signatory for the diocese of Dumio in the concilar acts, that Miro himself may have represented that see.
Miro also maintained „intimate and friendly“ relations with Martin of Dumio, the Archbishop of Braga and Metropolitan of Gallaecia. Martin’s principal work, Formula Vitae Honestae, is dedicated to him, and the Exhortatio Humilitatis, printed among Martin’s works, is also probably addressed to him. Indeed, Martin advised Miro’s counsellors to read his Formula so as to be able better to consel the king.
In the same year as the council of Braga, Miro conducted an expedition against the Ruccones (Runcones) of Cantabria, possibly a Basque tribe, with the intention of expanding his kingdom. This attack on a people within the Gothic kingdom was perhaps an excuse for Gothic reprisals against the Sueves. In 573 Leovigild subdued the region of „Sabaria“ (probably between Zamora and Salamanca) with the likely intention of preempting Miro. In 574 he „restored the province [of Cantabria] to his dominion.“ In response, Miro sent envoys Guntram, the Frankish King of Burgundy and a consistent thorn in Leovigild’s side, but they were intercepted and detained on the way by Leovigild’s ally, Chilperic I, the Frankish king of Neustria.
In 575 Leovigild invaded the „Aregensian Mountains“ near Ourense and captured „the lord of the region, along with his wife, children, and riches, bringing the region under his power.“Aspidius, the „lord of the region“, may have been a Hispano-Roman landowner who had sided with the Suevi. In 576 Leovigild again marched to the southern frontier of Galicia (the Douro) and menaced the small kingdom, even founding the city of Villa Gothorum (modern Toro). Miro sued for peace, and obtained it for a short time.[2] In 580 Miro endeavoured to support Leovigild’s Catholic son Hermenegild in rebellion.

For the events surrounding Miro’s death, the contemporary and near-contemporary accounts conflict. According to Gregory of Tours, in 583 Miro led an army to raise the siege of Seville by Leovigild, but the two kings held a conference before Miro had reached Seville and he returned to Galicia, where he died shortly after, supposedly from the effects of the bad air and water of Baetica. On the other hand, two Iberian chroniclers, John of Biclar and Isidore of Seville, concur that he died before Seville while assisting Leovigild with the siege of the town. Modern scholarship favours Gregory’s interpretation, taking into account Miro’s alliances with Francia and Byzantium, Suevic animosity to the Goths, and the shared Catholic faith of Sueves and rebels.

According to Gregory of Tours, in 583 Miro led an army to raise the siege of Seville by Leovigild, but the two kings held a conference before Miro had reached Seville and he returned to Galicia, where he died shortly after, supposedly from the effects of the bad air and water of Baetica

Been there. Done that. Now how can I help?

Rebuking Oppression on Every Front

Why Private Banking and Private Investment?!!!! TSI ISSUING THE BONDS - TSI entered into a JV and Asset Management agreements with a Gold Mining and bullion owning Companies, as well as with the Companies engaged in the Crude Oil and Gas exploration, to issue Bonds and Promissory Notes against those Assets